I don’t go into the studio for a month, now I can’t leave.

(yes, I know it was banned from the studio)

I know it doesn’t look like turquoise, but it is.

Now I’ve a piece of prudent man plume agate waiting for me, and you know how impatient that can be.

So where were we.

Which brings me to the Tate Gallery in London, and 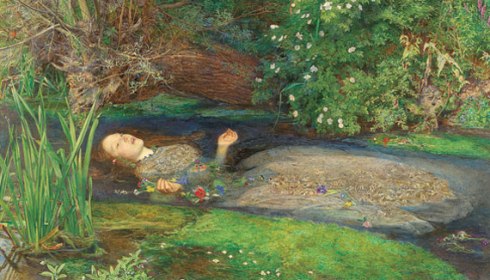 When I was home a couple of years ago I went to the Tate Britain specifically to see her.

She lives there and the one time I get to visit,

I remember when, more years ago than I care to admit, getting lost in awe as I stood in front of this painting.

But I remember it being ginormous, and really it isn’t.

It seemed to fill up the whole wall and I just stood there enthralled.

I really, really wanted to see her again.

In my opinion this is an example of one of those paintings that doesn’t grab you in books but completely wows you when you see it in real life.

I do love the Pre-Raphaelites however.

Here’s The Lady of Shallot. 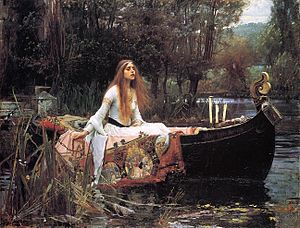 Isabella and the Pot of Basil. 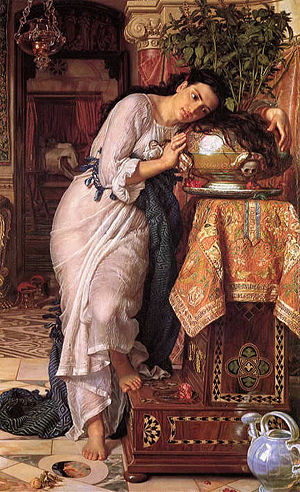 I love it that she’s got her lover’s head in that pot.

And this one is St. Eulailia.

which again I would never have thought I would like, but which completely blew me away.

It almost made up for Ophelia.

I really didn’t want to like it, but I kept having to walk back over to it.

The perspective was stunning.

I’ve slowly but surely been getting back into the studio, which is a relief because I was beginning to think we would never make up.

It really does take me a long while to get back into the swing of things after a family visit.

I’ve been putting more and more things up on Etsy, and one woman bought over five hundred dollars worth of jewelry from me.

That was incredible. I hope she likes it all when she gets it.

I’m almost impressed with myself.

The Lady of Shalott

In the stormy east-wind straining,
The pale-yellow woods were waning,
The broad stream in his banks complaining,
Heavily the low sky raining
Over tower’d Camelot;
Down she came and found a boat
Beneath a willow left afloat,
And round about the prow she wrote
The Lady of Shalott.

And down the river’s dim expanse –
Like some bold seër in a trance,
Seeing all his own mischance –
With a glassy countenance
Did she look to Camelot.
And at the closing of the day
She loosed the chain, and down she lay;
The broad stream bore her far away,
The Lady of Shalott.

Lying, robed in snowy white
That loosely flew to left and right –
The leaves upon her falling light –
Thro’ the noises of the night
She floated down to Camelot:
And as the boat-head wound along
The willowy hills and fields among,
They heard her singing her last song,
The Lady of Shalott.

Heard a carol, mournful, holy,
Chanted loudly, chanted lowly,
Till her blood was frozen slowly,
And her eyes were darken’d wholly,
Turn’d to tower’d Camelot;
For ere she reach’d upon the tide
The first house by the water-side,
Singing in her song she died,
The Lady of Shalott.

Under tower and balcony,
By garden-wall and gallery,
A gleaming shape she floated by,
A corse between the houses high,
Silent into Camelot.
Out upon the wharfs they came,
Knight and burgher, lord and dame,
And round the prow they read her name,
The Lady of Shalott.

Who is this? and what is here?
And in the lighted palace near
Died the sound of royal cheer;
And they cross’d themselves for fear,
All the knights at Camelot:
But Lancelot mused a little space;
He said, “She has a lovely face;
God in his mercy lend her grace,
The Lady of Shalott.”