I have struggled with making my own jump rings ever since I’ve been, well… making them. The only thing, in my opinion, more annoying than making jump rings is wire wrapping.

Fortunately I don’t care to make wire wrapped jewelry, but on the odd occasion that I need to make something requiring even the simplest wrapping technique you can believe me when I tell you it involves a lot of swearing and oftentimes the throwing of pliers.

I’ve tried lots of different methods and bought different contraptions to make jump rings, all of which make me want to pull my hair out.

Which is great at making coils, but I’m darned if I can get that special little cutting device to work as well as it’s apparently supposed to.

When I put the coil inside the doohickey thing and run the blade through it, all of the rings smoodge down, bend out of shape and down right refuse to co-operate.

I’ve even tried taping them to keep them all lined up tightly.

I did watch a lady on Youtube yesterday thread the rings over a length of dowel, which I’ve thought of doing myself, but have never bothered with as it would mean going out and buying every different dowel size that I need.

Which is most all of them.

Still, I might give it a go as I do like to let my pent up anger out at least once a week and I’m sure this will help with that.

Until then that sweet little cutting vise thing just sits there on my table taunting me.

I think I hate it.

I also have one of these.

Which looks as though its only existence in life should be to do something wonderful.

Turns out, however, I was using it wrong.

I was supposed to be using it like this.

Should have read the instructions first I suppose.

Even so I still find it fiddly, awkward and annoying.

Aside from using these fine tools I’ve tried taping the coils and sawing them using all manner of painful hand positions.

I’ve cut them on the outside.

I’ve cut them on the inside.

I’ve used the saw by placing my hand in-between the blade and the saw frame.

I’ve even filed a groove in my trusty bench pin to lock them in place.

It has been a war people.

A war I am still determined to win!

So a word of warning:

even think of telling me that you’ve been using this simple way of cutting jump rings all of this time as it might well be the end of our good relationship.

And yes I’m annoyed with myself.

But this duh moment has definitely brought a little more sunshine into my life.

So without further ado…

Make the coils and tape them.

Place them on the edge of a wooden block or table.

O.K. so I couldn’t hold the camera and the coil, so…

Now don’t laugh because however simple this seems to you I just didn’t ever think about putting the coil over the edge of a wooden block. I did it every other way imaginable, but…

It’s not actually as awkward as I make it look in the video because here I’m using a very large diameter coil which has made it a little wobbly. 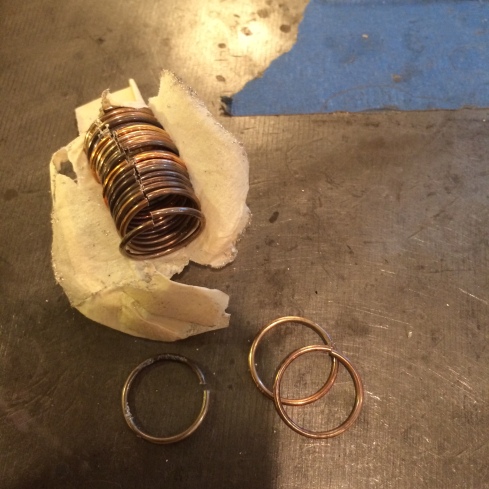 (These coils are brown because I annealed the wire first.) 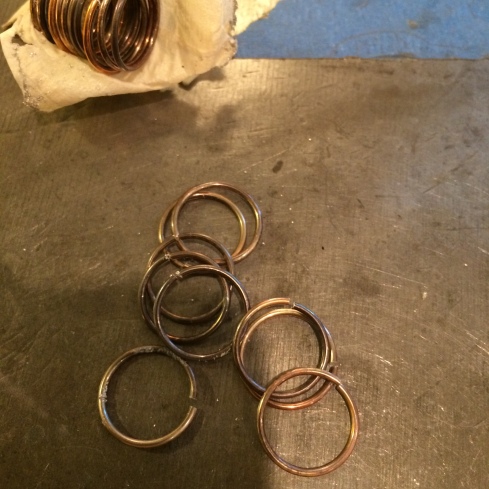 Here’s what I did with mine…

Then stretched on round nose pliers.

Trying as best as possible to keep them uniform in shape.

Ball up the ends trying to maintain a uniform length. 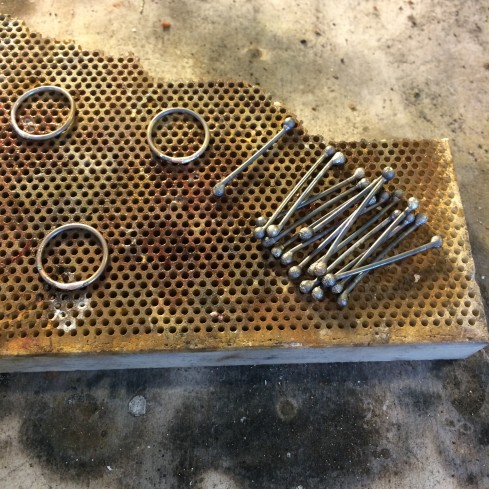 Buff off the roughness of the ball.

Buff down the soldered area of the links.

ALWAYS use safety goggles and a mask.

Bend the balled up lengths.

And attach one of the links to either side.

You might need to pry open the center of the link to get the ball through. If you do, make sure you re-form the link.

Close the ball completely so that the link doesn’t move out of position.

Now you can complete the chain. 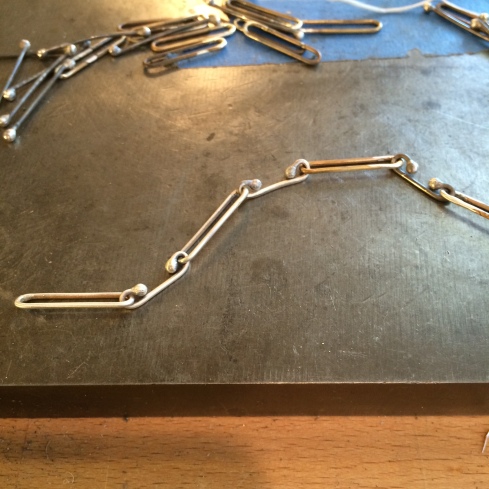 Until you have the length you desire.

This time just bend one end the same as the others and shape the other end into the clasp end. 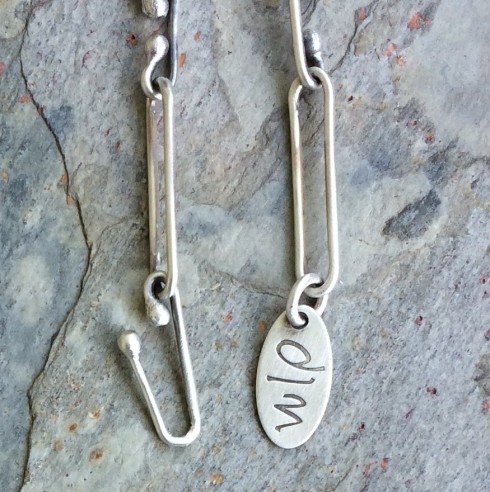 I am English, but live in Houston, TX. I have a degree in Sculpture. I love to make art. I sell my art for charity as I believe there should be no reason for someone to go hungry in this world. I am a wife, mother, pottery maker, jewelry maker, quilt maker, painter, cat lover, and, dog liker. And I am very fortunate to be all these things. END_OF_DOCUMENT_TOKEN_TO_BE_REPLACED
This entry was posted on Saturday, October 10th, 2015 at 10:05 am and posted in Other Stuff. You can follow any responses to this entry through the RSS 2.0 feed.
« I present to you the…
Well that was fun wasn’t it! »

8 responses to “And now… Jump Rings…”