It’s the best I’ve done yet.

You can see where it went – here.

I’m not sure yet where the next $1,000 will go. Maybe Doctors without Borders, or Heifer International.

I might need to pick the more uplifting of the two this time however and send someone a cow.

Here’s to a new week.

I start at the assisted ministry today. I’ve been put down for answering the phones which kind of worries me a bit. I have to keep reminding myself that of course I don’t know what happens there and won’t be able to help anyone at all that’s unfortunate enough to get my line.

I didn’t want to work in the shop as I don’t want to have to look at all of the stuff I’ve donated. I might have withdrawal and need to grab it all and bring it home again, and that would be disastrous.

I’ll let you know how it goes.

Thanks to Vicki I settled on Heifer International. You can see my progress HERE

I know I can set it now, but I can’t overwhelm myself all at once.

And finally a new experiment.

Look at that copper. 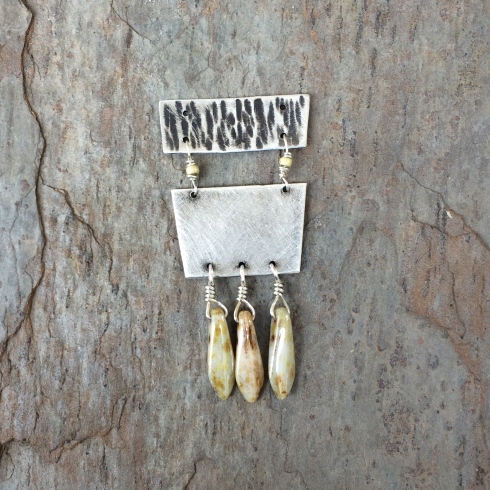 Which is funny as it sounds like it should have smoke and explosions.

I’m liking the copper and brass. The silver is a tad boring. I also worry about the weight of my necklaces. I like them to have a good feel, not thin and flimsy.

Still not sure if I like them enough to bother with them.

I’ve been working on my website. I waver continually with whether to bother with it as I have Etsy, but I so want to feel like a real boy.

Not going to think about it now. I’m going to answer those phones, get some groceries, and then think about the meaning of it all.

Actually I made these on Monday because I was having trouble getting into the swing of things again. 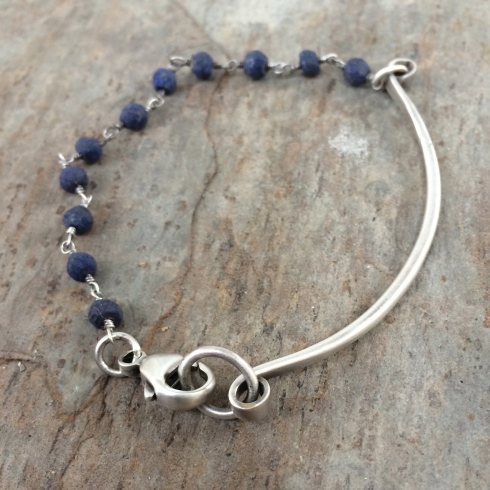 Just some simple little lovelies to get me going.

Then of course there was the riveting.

But when it came down to it I just wasn’t up for another bash at it so soon.

So I finished this instead. 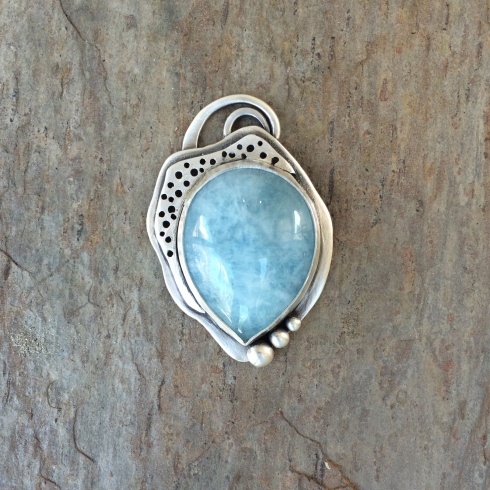 After that I went over to the painting area and worked a bit more on this.

But quite frankly I think I’ve lost my umph.

Robin Williams has made me sad.

I told P he should retire before we get to be old which will be tomorrow if things keep going the way they are.

But he said no, which kind of put me out a bit.

He said he’d be bored.

I told him that was a shame as there were loads of fish waiting for him to not catch.

He still said no.

I think he might be trapped in the wrong cycle of life.

Shake it off girl there’s the world to save today and you can’t be moping.

I’ve made another thousand and am in the process of deciding where it should go, but I’m thinking that I should just start sending it to happier places.

Heifer International is a happier place. Oxfam, Care, etc. are getting to be too overwhelming for me, and I don’t really know how it will all stop.

I talked to P about it, and we thought that maybe we should let the governments get on with giving aid to these war-torn places, and perhaps just concentrate on helping people out through giving them the resources such as Heifer has to offer.

I don’t know, how do yo choose between horrible and horrible.

What with that and Robin Williams I might just have to stay in bed today.

Somebody’s got to get a handle on the riveting dilemma.

Good grief England, what you playing at?

This was the first and last time we won.

Yes, back in the good ol’ black and white days.

Got to keep the dream alive.

It’s not called the beautiful game for nothing.

I finally finished the wonky necklace.

(Actually, I’ve placed the piece for the photograph more wonky that it actually is. It really didn’t come out wonky at all once I’d finished it.)

I decided to put its danglies on after all.

I quite like it, but I never know how long to make the chains on my pieces. It depends on the person’s neck really. I think on Etsy I’m going to just have to start asking buyers which length they prefer.

I took a break from the painting to finish it up as the jewelry table was definitely calling. I’m beginning to recognize it now. I’ll be making something, and even though I’m really enjoying it, I can feel my thoughts pulling in another direction. I’ve always tried to ignore it before, and get on with what I think I should be doing, but now I’ve just decided to go with the flow.

I did lay in the basic colours though, and I’m quite liking the table.

I really enjoy the vibrant colours that the oil pastels give.

And, I went ahead and sent my money off to Heifer. I selected the Haiti Project – here – although I’m pretty convinced that they just pool all the money and send it where needed.

So I’m off now to the studio to make my next thousand.

As my new friend commented yesterday, there are many starfish to save – even if you can only save them one at a time.