I finished the custom order and the lady liked it!

It was a nice surprise to hear from her that she wanted it.

The day I finished it I told P that I didn’t think I was up for any more custom orders as it was just too hard for me to get to grips with what someone really wants and then I end up wanting to under charge them because I’m unsure of myself and feel bad for them that they’ll be getting something that they don’t really want.

Then yesterday, when I was upstairs cleaning out my ‘clean’ studio, the one where I make my quilts etc., I got an e-mail from another person wanting a custom order.

And so it starts over…

Actually I’m looking forward to it.

(Remind me of that when I start to moan again)

In the short time it took me to give up taking custom orders and then accept another one I tackled my thirty year stash of craft books .

To be honest I didn’t think I would be up for it and P definitely had doubts.

In fact he laughed at me which was not funny and not very encouraging.

And I haven’t finished yet.

They haven’t actually made it out of the house yet, but I’m working on it.

Of course the upstairs A/C decided to pack up half way through my sorting, but I soldiered on and now I’m feeling quite pleased with myself.

They’re all going to the ministry up the road although I think that they may have to open a new room to accommodate them.

Nope. Don’t talk to me about it.

I’m not really that put out by the sofa covers needing to be washed five hundred and sixty-three times daily.

Nope, not at all.

A few probs around the house.

Nutmeg isn’t mine, but she sure acts like it taking the best seat in the house and the cosy blanket.

She’s the Boy’s, who showed up with her a few months back when he came home from university.

I love cats I do.

I have the fabulous Wally Walnut. 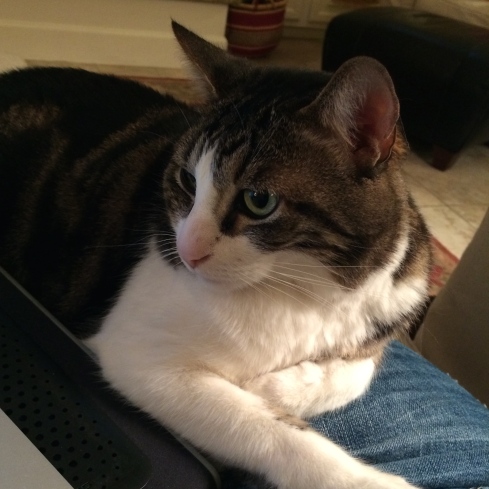 My constant companion, even if I don’t need his assistance all of the time.

And the rather fat, very heavy, but super cuddly Pickles. 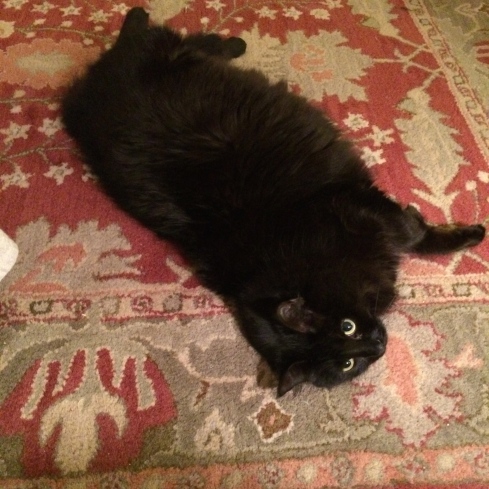 Who would lay at my feet over subjecting me to her bone crushing love any day because she knows she could do with losing a few pounds.

I think I told you that one night I was dreaming I had a railway sleeper on my chest (don’t ask) and woke up to find pickles laying on me.

I was almost crushed to death in my sleep.

So despite the danger of broken bones, bruises, and strained backs when you try to lift obese animals, I love cats. They’re my favourite. So much so that P has told me that if I ever bring another one home it will be the last thing I do.

I don’t think so!

But, I love P and am getting a little tired of the litter box myself, so I was just a little p.o.’d when the Boy brought Nutmeg home, and especially p.o.’d when on his latest visit this spring break the extremely cute, but incredibly clumsy Nutmeg had obviously been having one hell of a time ripping open her body on fences.

But that’s o.k. It only cost me $350 to put her back together because the Boy is broke.

I should get him the collar of shame to wear also, perhaps he’ll think twice next time when he can’t clean those tricky bits and keeps bumping into walls.

And then there’s the guinea pig…

Doesn’t everyone need one for their front hallway.

Needless to say I’m looking forward to the rodent going back to school also.

And then there’s the shoes. 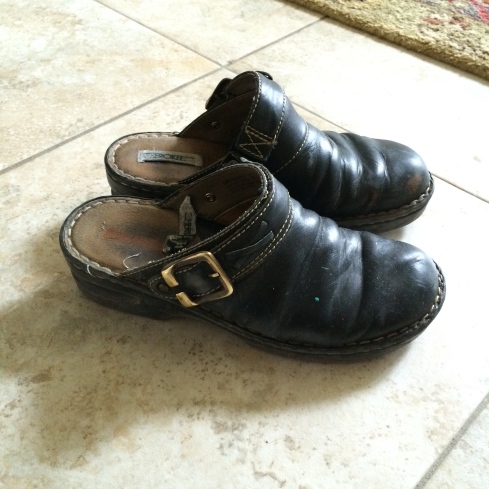 The ones relegated to the studio because they got a bit too grungy for their own good. 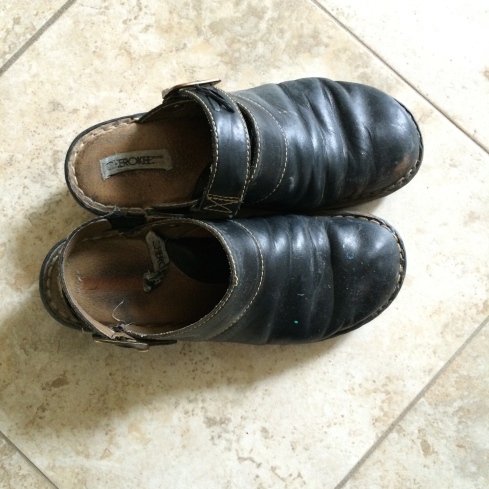 Well they finally gave up the ghost and died. 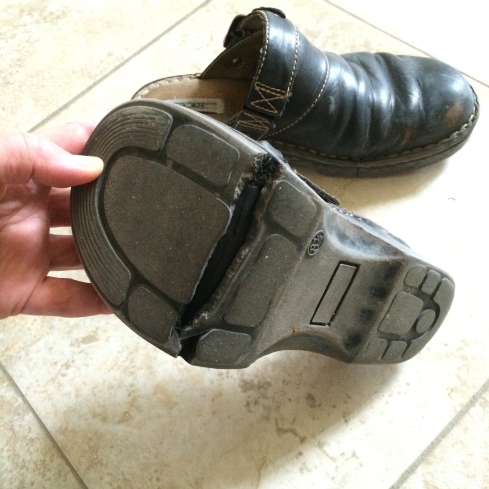 It was somewhat of a relief really as the water was getting in.

So I had to buy a new pair which proved more complicated that it seems.

I wanted a nice, comfortable pair, but I didn’t want to spend too much on them as they would soon look the same as the old ones.

So I finally settled on these.

Which are definitely comfortable, but make my feet look stubby and my ankles fat.

Oh well we can’t have everything.

In other news, the studio looks like a bomb hit it. 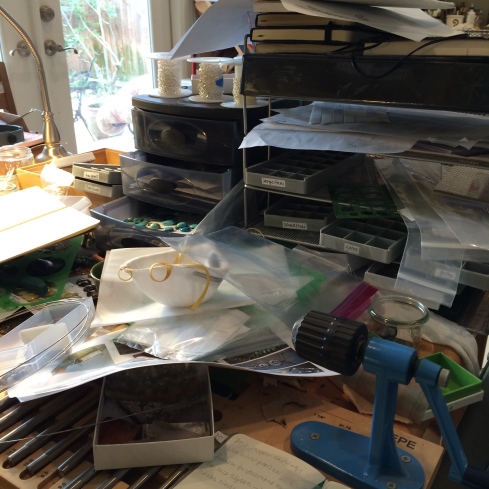 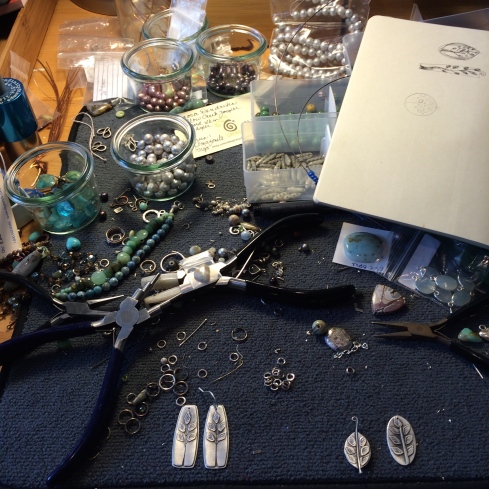 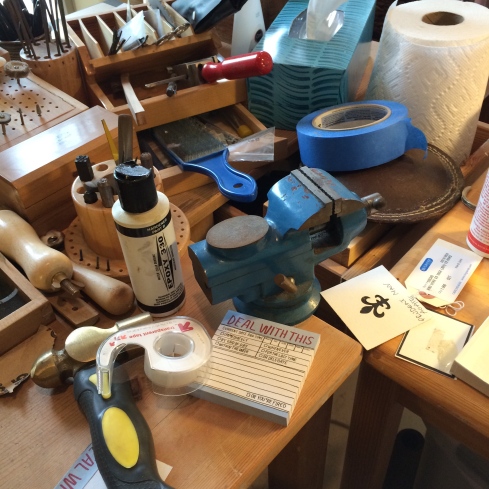 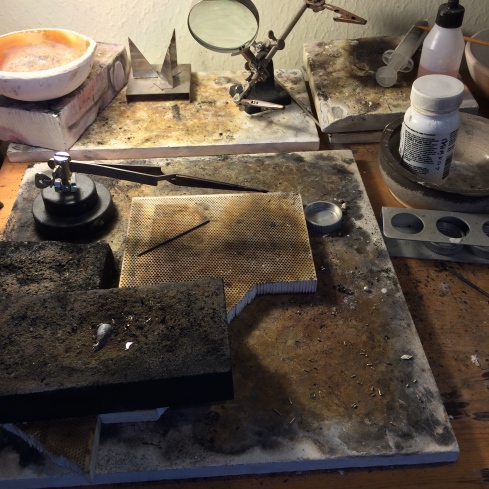 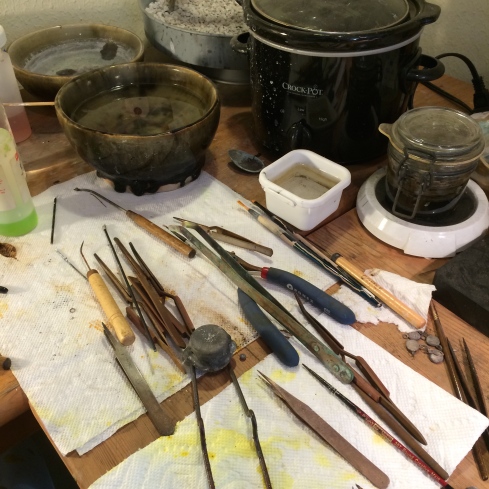 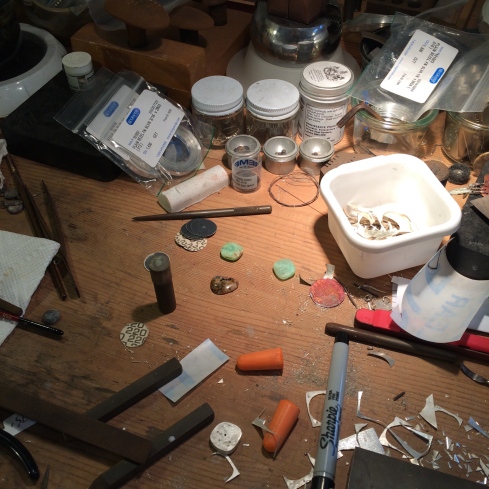 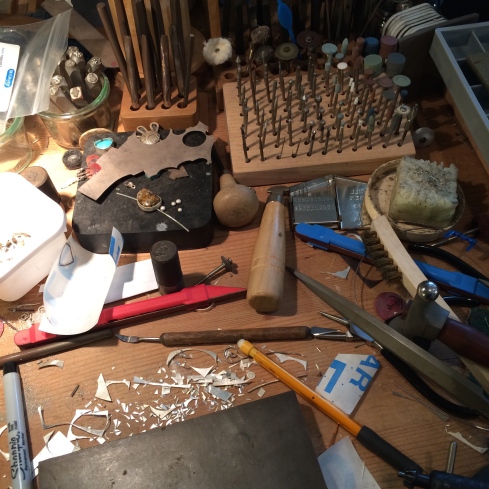 Been doing a bit of snipping.

That’s a lot of mess for just five pairs of earrings.

For some bridesmaids, if they’ll have me.

Actually I made this also,

This is the back, which I’m kind of liking, but kind of repulsed by as it looks like the alien face thingy.

And, lastly for Cecilia. 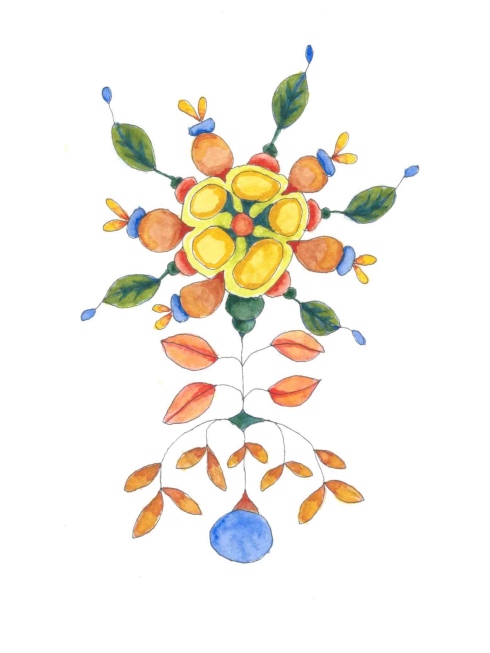 That might just put me over the edge completely.

I thought I would show you a pic of Wally Walnut.

P says he always looks like this, but I know better.

Here he is in his go to, I’m feeling low, place. 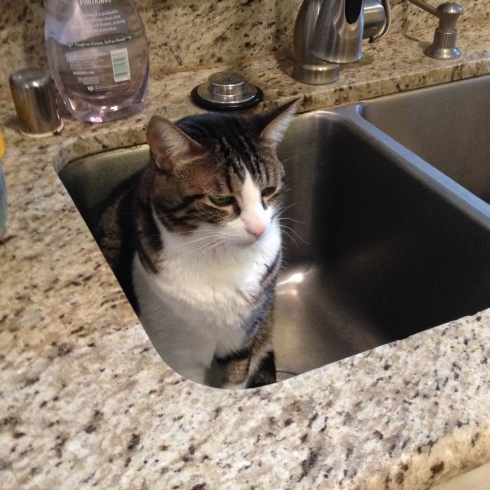 Here he is looking after his old pal.

Whether he wanted looking after or not. 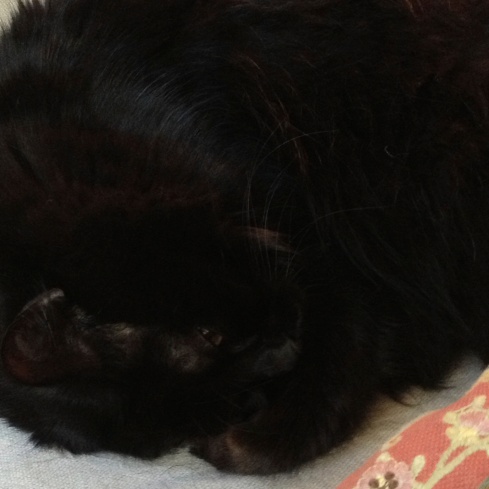 (Pickles doesn’t like you looking at her because she’s a bit fat, but we don’t talk about that.)

Which brings me to.

Don’t you think this looks a bit like the Predator? 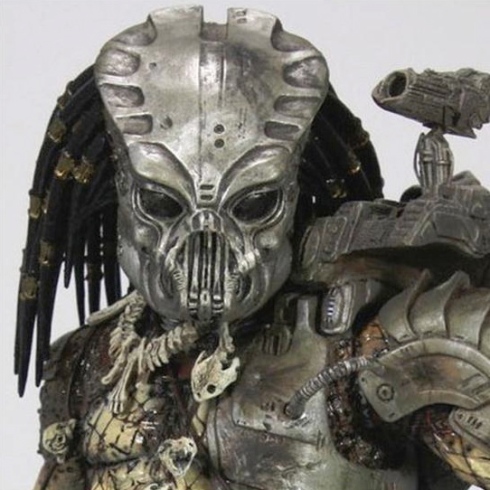 Or is it just me?

I had such good intentions for today.

I was going to pretend I was a grown up and take my jewelry seriously.

I was going to quit painting and make beautiful cabochony necklaces and silvery bracelets instead.

But then the power went out at 11 pm last night, which was great as it was so quiet with no a/c, fridge, pumps etc., going. And it was night time, so no need for electricity. Right?

At 4 am the house alarm went off. The electricity hadn’t come back on so I bravely had P go check everything while I had some juice.

It was quite bright as the Christmas lights on the house opposite, where the electricity had chosen not to go out, were shining like a hallelujah moment.

Just as we settled back to sleep, the electricity man came and parked outside our house. P said it was a slightly early school bus, so I made him get up and look for being so ridiculous.

That will teach him not to recognize the sound of two utility vans with flashing lights and motors running sitting on your doorstep.

I mean what school bus has flashing lights?

I forgave the utility vans as they were saving the world, one transformer at a time.

We settled back to sleep.

First at five minute intervals then at three until our brains exploded and began to seep out of our ears.

Turns out the alarm had been on the back up battery all night and was now running low and screaming out for a service, which was all well and good but no matter how much we told it to stay calm and that we’d get it help first thing in the morning, it just went on and on with its temper tantrum until we couldn’t go on any more.

We pressed all its buttons, calmly at first in that, we’re the boss of you, way, but couldn’t turn the darn thing off and eventually had to call the nice alarm lady who helped us find its reactor core so that we could pull all the cords out and shut it down.

It was touch and go let me tell you.

So now, I am really, really, tired. Like my face is falling off tired. And all my good intentions have gone out the window.

Maybe tomorrow I’ll be a fearless jewelry maker, but for now I’m going to work up enough energy to get out of bed before I have to take Spencer the One Eye Wonder to the vets.

So I will leave you with a doodle.

And a pic of Wally Walnut. 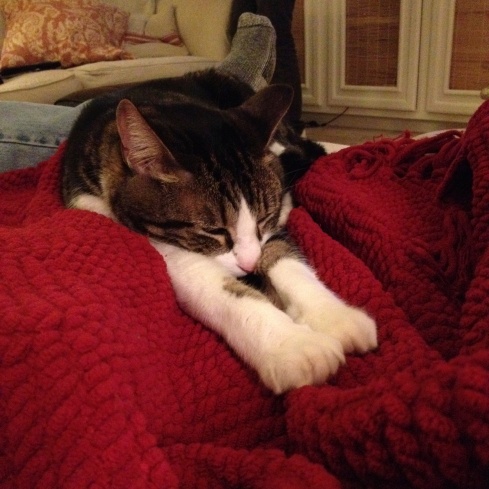 I keep telling him that he doesn’t have to bow down to me, that I consider him an equal, but who can stop adoration at its highest.

I do feed him after all.

Just when is one more too many?

Tired and fed up and a little low this morning.

Want to stay in bed.

It’s not cold. The time for fires and quilts is over for us now.

But I still have one of mine on the bed.

Well, on my side of the bed. P doesn’t seem to have the same appreciation for these things as I do.

Saw this quilt in the Sundance Catalogue for hundreds and hundreds of dollars.

So I made my own. 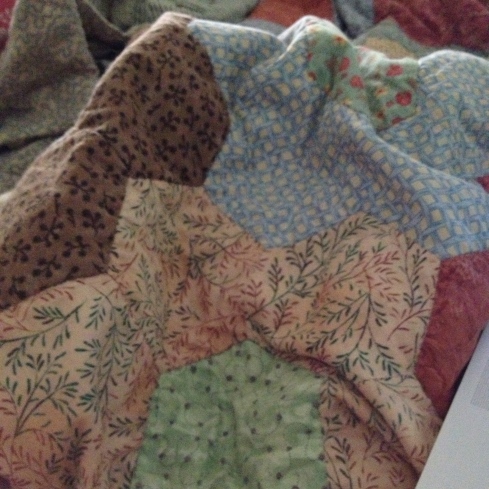 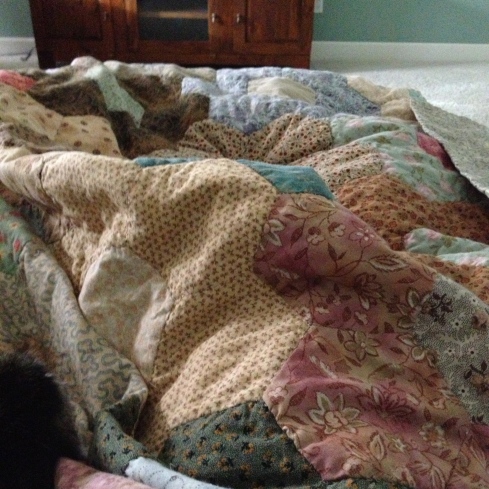 It’s a little old granny-ish, but it’s one of my favourites.

Actually, don’t tell P, but I have another quilt under this one also. 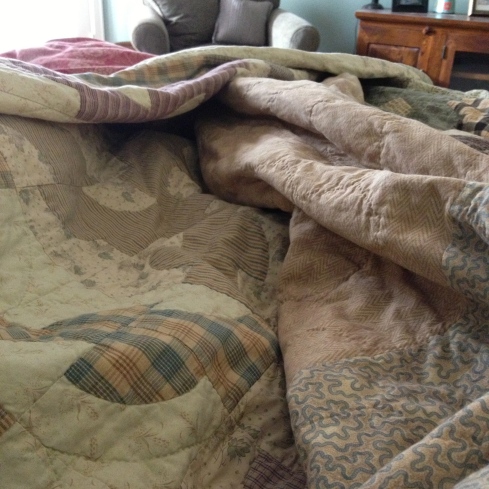 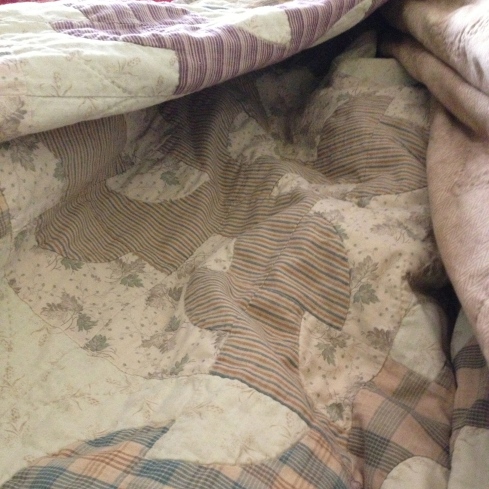 This is probably why I’m feeling low.

Too many darn blankets holding me down.

I was searching for a link for the Drunkard’s Path pattern, when I came across this.

So (for heaven’s sake) now I’ve got to make one.

Like I haven’t enough U.F.O’s (unfinished object) on my plate.

There are four of them, but these two like to torment Wally.

It’s a wonder he can see them through the dirty windows. (Guess what I’ll be doing today).

Pickles can’t help but get involved, especially when there might be trouble.

But that cat has Pickles’ number.

“Wotch you lookin’ at boiii?”

(Actually Pickles is a girl but I try to keep all the cats grouped into one sex, just to avoid confusion. To all you cat psychologists out there, there is no evidence that this is why Pickles eats for comfort, or has aggressive tendencies. She’s just fat because that’s how she likes it and she considers it her duty to protect her family. As we all should …).

“Really Wol, You need a Pickles cat to protect you?

I have disdain for you all”. 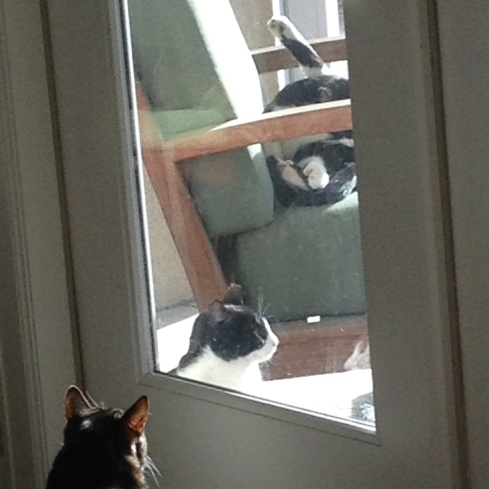 “I cannot even look you in the face, and my brother, he licks his behind at you”.

(You might not be able to tell just by reading this, but he has a French accent. (It’s beyond me how they got here). However, he likes to swap up the accent a bit with a little East End London at times – as with the, “Wotch you lookin’ at boiii”, comment. It works better for the, in your face, attitude but he seems to prefer his native tongue for contempt. As in this excellent example).

Is it love or do you just need to get comfortable?

Since when is my arm the new sofa? 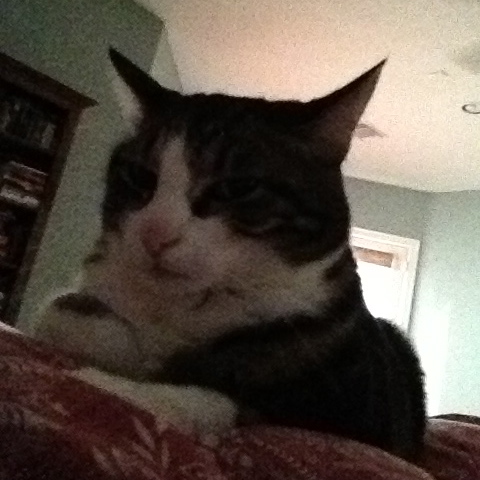 I woke up this morning after dreaming I was pinned down by a steel beam.

Needless to say I was Wally’s new resting post.

No matter to him that I was laying on my side and he had to balance on the top of my arm. Or that I kept trying to turn over and he had to jiggle his position accordingly.

No matter that I was paralyzed by his middle-aged weight and had no use in my arm for ten minutes after I got up.

At least he loves me.

What more can a gal want.